You’ve been invited to the party of the summer. You can’t show up empty-handed. But, what should you bring? The number of beer and wine choices out there is staggering. And, if you’re overwhelmed by the options, don’t fret. We’re here to help. Simply pick something off this list of popular beers and adult beverages and you’re golden. Cheers! 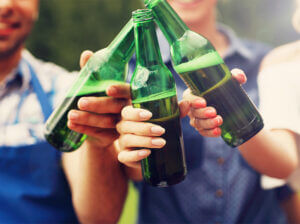 Lagers are arguably the most popular beers in the United States. They’re yellow in appearance and offer a clean, crisp and refreshing taste. Lagers have an average alcohol-by-volume (ABV) of 3 – 5%. The low alcohol content provides a smooth mouthfeel. It also enhances the beer’s drinkability and makes it a safe bet to bring to any party. Your options for lagers are practically endless, too. They include famous brands like Budweiser, Busch, Corona, Miller, and Coors.

Ales are another popular beer choice. And, they actually have a similar build and flavor profile to lagers. A lot of folks will often confuse the two. However, they’re actually quite different from each other. Ales tend to have more hops flavor than lagers. Hops provide bitterness to balance the sweetness of the malt in the beer, as well as add flavors and aromas, such as citrus and pine. Moreover, pale ale is a well-known variation that uses pale malts in the fermentation process to yield a light color. Overall, ales are thought of as summer beers and are ideal for occasional beer drinkers. Brands like Founders Brewing Company, Sierra Nevada and Goose Island make a great addition to any party.

Everyone’s heard of Blue Moon. However, the selection of wheat beers on the market is much larger than you think. Wheat beers are among the most popular beers in the country because of their light body and thirst-quenching qualities. Depending on the type of yeast used during fermentation, flavors range from herbs and spices to fruity notes of orange and banana.

Offering a pungent, tangy and fruity sensation, an IPA gets any party hopping. Interestingly, this style of beer has been around since the 1700s. Today, it’s a staple of the craft beer scene in the United States. It features higher alcohol content and more hops than most other beers. And, each IPA has a unique flavor, which makes them ideal for crowds that like to try something new. Some of our favorites include Dogfish’s 60 Minute, Sierra Nevada’s Torpedo Extra, and Lagunitas IPA.

Not everyone drinks beer. That’s why bringing wine to a gathering is another popular and practical option. Traditionally speaking, champagne is always a crowd pleaser and it’s a wonderful way to kick off a celebration. Of course, its dry and crisp flavor is delectable on its own, but you can always bring along mixers (e.g. orange or pineapple juice) to sweeten the offering.

Stock Up at Festival Wine & Spirits

Whether you’re heading to a birthday party, summer BBQ or anniversary celebration, you can find the best beverages at Festival Wine & Spirits. We offer the most popular beers and wines. We even offer monthly wine tastings and other events so you can expand your palate. For more information, contact Festival Wine & Spirits at 410-266-7227.